A viable seed is one which is capable of germination under suitable conditions.  The definition includes dormant but viable seeds, in which case the dormancy  must be broken before viability can be measured by germination. A non-viable seed, therefore, is one which fails to germinate even under optimal conditions,  including treatments for the removal of dormancy. The practical definition of  viability depends upon the context in which it is used; for example, to the  ecologist, viability implies the ability of the seed to germinate and the ability of  the seedling to establish itself in the environment in which the seed finds itself.  However, when seeds are utilized to produce a crop, for example, then viability is  a measure of the suitability of the seed batch to produce a satisfactory crop. 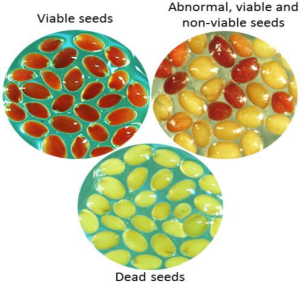 Seed vigor is the speed of germination . It is the sum total of those properties of  the seed that determine the potential level of activity and performance of the seed during germination and seedling emergence. Seed vigour is an important  component of seed quality and satisfactory levels are necessary in addition to  traditional quality criteria of moisture, purity, germination and seed health to  obtain optimum plant stand and high production of crops.As agricultural and  horticultural techniques become progressively more sophisticated, the need for  high vigour seeds will increase and testing standards, similar to those recognized  for germination will be required

A seed’s vigour determines how well it performs, its ability to yield strong  seedlings that become robust and uniform plants. On other hand, seeds seen to be  low in vigour will produce weaker seedlings that will be more susceptible to  attack, contamination and other environmental issues. When seed is purchased ,  the germination percentage expressed on the seed tag is the result of a worm  germination text conducted under nearly ideal conditions. A cold vigor text more  nearly approximates the conditions under which many seeds actually germinate in  a field.

There is no universally accepted vigour test for all kinds of seeds. The  determination of following vigour tests will be useful in gaining additional  information on seed quality.

Why do we test seed viability? It is important to know that the seeds that are  stored in a gene bank will grow to produce plants. … The viability of seeds at the  start of storage will also determine, within the environmental conditions, the  storage life of the accession.

Testing the viability of seeds by conducting a seed germination test is an  important way to deduce the quality of your seeds, to determine the efficiency of  seed storage method and to help plant the proper amount of seeds.